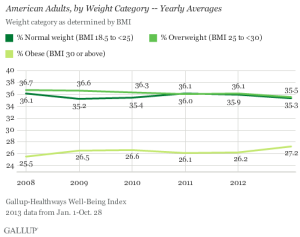 WASHINGTON, D.C. — According to data provided by Gallup.com, the adult obesity rate so far in 2013 is 27.2%, up from 26.2% in 2012, and is on pace to surpass all annual average obesity rates since Gallup-Healthways began tracking in 2008. Increases have occurred across almost all demographic groups.

The one-percentage-point uptick in the obesity rate so far in 2013 is statistically significant and is the largest year-over-year increase since 2009. The higher rate thus far in 2013 reverses the lower levels recorded in 2011 and 2012, and is much higher than the 25.5% who were obese in 2008. 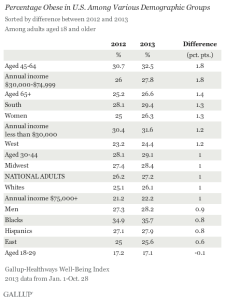 Obesity rates have increased at least slightly so far in 2013 across almost all major demographic and socioeconomic groups.

The U.S. obesity rate thus far in 2013 is trending upward and will likely surpass all annual obesity levels since 2008, when Gallup and Healthways began tracking. It’s unclear why the obesity rate is up this year, and the trend since 2008 shows a pattern of some fluctuation.